Syndactyly is the condition of two or more digits fused together. All the digits are jointed together in the gestational period when the hands and feet are formed firstly. In the following periods of the gestation, fingers are separated from each other due to the regression of the tissue connections in between fingers. Malformations happening in this developing period prevent fingers from separating and therefore causing syndactyly to occur.

Syndactyly is one of the anomalies occur frequently among the congenital anomalies of the hand. Its percentage in the both hands is 50% while the probability of being hereditary is 10 - 40%. It most frequently occurs between middle and ring fingers. Syndactylies occurring between small and ring finger have the second frequency. Syndactylies between thumb and index finger and between index and middle finger are seen more rarely. While syndactyly can happen alone, it sometimes may also occur together with the other hand anomalies or with the anomalies found in the other parts of the body. Thus a baby diagnosed with syndactyly should also be checked for the presence of other anomalies. 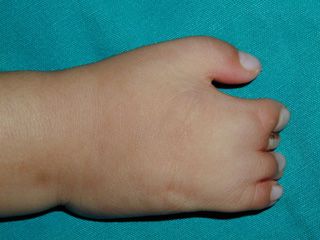 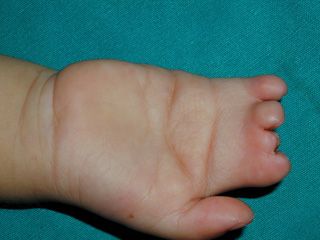 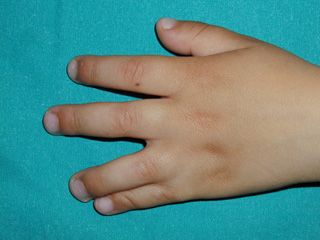 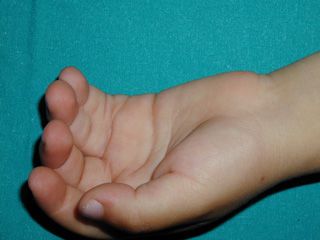 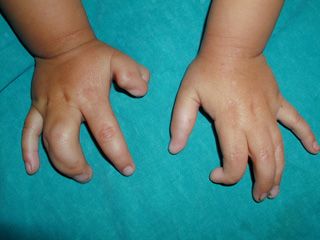 Syndactyly can also be classified according to the finger length covered and the presence of bone unification. 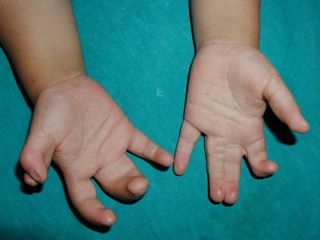 The treatment is usually surgical. In very weak cohesiveness where no functional deformation occurs, in situations with the presence of other medical problems that may prevent the surgical treatment or when separating the fingers may cause to lose the functions more, the surgical treatment can be left. Sometimes attached fingers may lack enough tissue to form a moveable, independent and a stabile finger. In such situations leaving the syndactyly untouched may be more suitable just not to lose the present hand functions.

The time advised for the surgical treatment is the 1st age and afterwards. The main purpose is to separate all attachments before the start of school period. Otherwise not only low development on gripping and catching skills but also the fingers that supposed to develop having different lengths from each other , by affecting each other’s normal developments, can be seen causing angular structural deformities and joint pathologies. In surgery, the residual skin parts causing the webbing are cut jagged and shared between the two attached fingers. But incomplete parts still remain mostly in the angle of the skin cover that need skin-grafting to these parts from such body parts not attracting attention as groin and anterior elbow. If the syndactyly involves with two adjacent gaps on the same hands, these gaps should be opened at different sessions. If opened at the same session, the blood circulation of this finger may have problems as on the both sides of the middling finger will have surgery. For example; if there are cohesiveness between all the gaps of index, middle, ring and small fingers, the cohesiveness between index and middle finger and the gap between ring and middle fingers are opened in the first operation and the gap between the middle and ring fingers will be opened in the second operation done 3 months afterwards respectively.