Kienböck disease may be defined as avascular necrosis (circulation disorder) of lunate bone in the wrist and wrist problems developed depending on it. Lunatum is one of the 8 small bones on the wrist. Lunate is in the middle of the wrist and forms the wrist joint with two small bones on the both sides of it (scaphoid and triquetrum), and also forms the joint with forearm bones (radius, ulna). Actually the bone looses its normal functions after collapsed circulation because of exactly undetermined reasons. Pain, movement limitation and calcification in the wrist may arise because of luantum looses its normal structure and its shape changes. It is mostly seen between 20-40 years. Rarely, it may be seen in both wrist.

Current variations may be the factor especially in the skeleton system (different length inequality of forearm bones; ulna, radius); and factors such as continuous exposure to recurrent trauma in the wrist is effective in the disease.

It arises with pain in the middle section of the wrist. Pain increase by lifting the middle finger up is characteristic. Gradually pain increase is seen in the wrist. Unless direct radiological finding is present in the early stage, deformity in the lunatum, collapse, sclerothic region formation and disjunction may appear. MR and computerized tomography are useful for diagnosis. Particularly if there is a suspicious in the early stage, MR imaging is important for early diagnosis.

Generally progress of the disease is slow and progressive. It is divided into 4 stages. 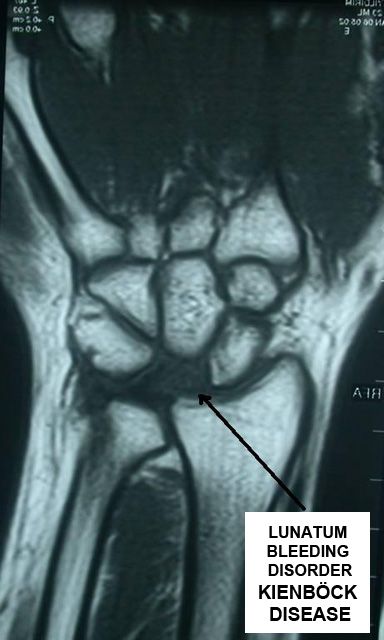 Stage of the disease, existence of length difference between arm bones and age of the patient are efficient in the treatment decision.  Application of resting brace for a while is enough in very early stage. In advanced stages (stages 2-3), correction of the current length difference in forearm bones is useful. Besides correcting the mechanical problems, this also provides an increase in blood flow, thus an increase in bone circulation. If there is no difference in length, vascular bone transplantations should come to mind as a treatment option. In further stages, to change the direction of the load by fusing small bones may be provided. If the wrist joint was calcified, wrist freezing may be planned. Recently, treatment methods performed by camera system have become popular. Sometimes treatment decision may be difficult. Experience is important for decision mechanism. The patient should be informed about the treatment that will be applied. Sometimes the patient may need multiple operations. Pain moderates with most treatment, intensive physiotherapy is required for movement limitations.