Nerves are the transmission systems that transmit signals incoming from the brain to various parts of the body and vice versa. Nerves are made up of thousands of fibers, which progress in cables coiled in protective sheat as groups inside the nerves. The system that bears the cabled transmission is surrounded by a protective insulant.

Nerves can be damaged due to compression, pressure and cut-off. In case of stretching and pressure injuries, the structure of the protective layer surrounding the nerve is not interrupted, yet the transmission system breaks down due to fibers damages, hence the nervous system fails to function. In case of cut-off, not only the nerve fibers but also the surrounding protective layer is damaged. After damages, transmissions cannot be conveyed from brain to the muscles, hence they become dysfunctional or sensory transmissions received from different parts of the body cannot be transmitted to the brain.

Once the nerve fibers are damaged, the structure of the surrounding protective layer subsists. Part of the damaged nerve fibers up to upper transmission station die away and melt down, leaving the protective layer in the form of hollow tubes. Recovery period begins in a while. If the protective sheat is not damaged or the sheat is repaired, fibers continue to grow through the innards of hollow tubes and recovers up to the receptors of motor or sensory nerves. Nerves are the tissues that heal the most slowly in our body. If the protective sheat structure is not repaired, nerve endings that undergo a recovery period and grow on cannot find their way, hence cysts called neuroma are formed at the nerve ending. These cysts form painful electric signals when pressed on them.

If the nerves are fully cut, both nerve endings are identified for treatment and the surrounding protective sheat is repaired by way of thinnest stitches as possible (Fig. 1). Objective of the treatment is to ensure sustainability of the surrounding sheat structure and to enable the nerve fibers, which are now in a healing process, find their way up to the final transmission points. Nerve sheats should be treated carefully with the thinnest stitches as much as possible by way of microsurgery methods to avoid excessive scar tissue and pressure in the nerve healing area. Nerves thin down particularly on hand and finger levels and progress adjacent to vascular structures in general. When a damaged nerve is identified, the vascular damages are often identified in parallel. As very thin stitches are used, a 3-week plaster treatment is applied to protect the repaired area. 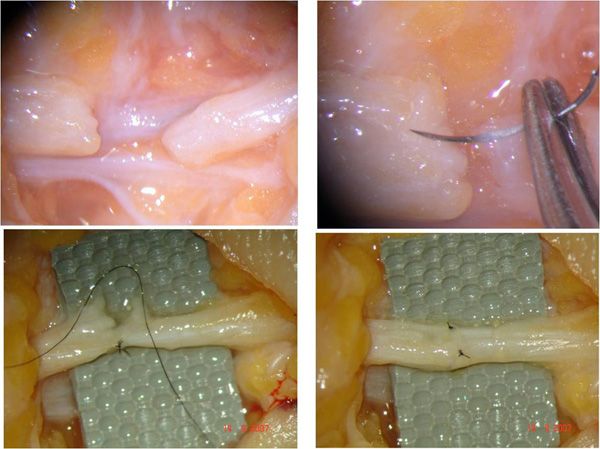 If the injury is very contaminated and is to be left open, nerves may not be sewn in the first surgical operation. In case of nervous defects, a nerve graft often collected from the leg is inserted in between to enable nervous sustainability.

It takes 3 to 4 weeks for nerve fiber to grow up against following the repairs. Fibrils usually progress 1 mm on average within the nerve tubes depending on the age of the patient, type of injury, smoking etc. For this purpose, sensory recovery may take up to 1 or 2 months and 6 or 8 months depending on the proximity of the injury to the target. During this time, the patient should be careful about finger tip injuries while touching warm objects and working. Activity of the muscles stimulated by the nerves should not be lost during the expected nerve recovery.