The muscles that bend fingers are called flexor muscles. These muscles are existed in the forearm while their extensions, so called ‘’flexor tendons’’ go more distally to move the wrist and fingers ( Figure 1). The flexor tendons pass through some tunnels(pulleys). These pulleys prevent the flexors from moving away from the bones, and provide stabile and accurate joint functions. 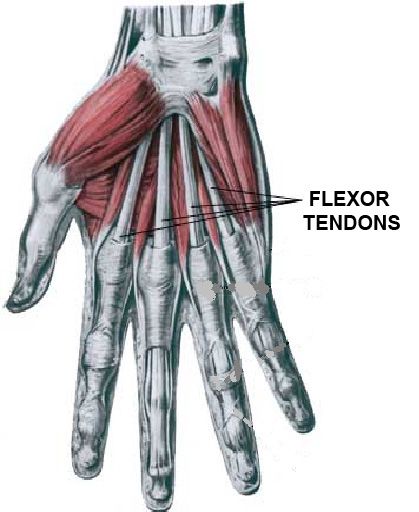 Flexor tendon injuries may occur after deep cuts in the forearm, wrist, hands or fingers. Depending on the exact location of the injury , nerve and/or vessel injuries may accompany as well. When the tendon is  totally cut, the distal part is in place, but the proximal end of the tendon move away with its muscle contraction. In these cases the patient cannot bend the finger(s) and/or the wrist. In some cases the tendon is partially cut. These patients often feel pain although the function is provided. The untreated, incomplete tendon injuries may break off totally from the cut site when the patient continues  to use his/her hand. This why, if the damage on the tendon is more than 25%, it should be repaired with a surgical intervention.

After tendon surgery, the hand is placed in splint for 3-4 weeks. Following this immobilization period, a professionall physiotherapy is needed. If there is a bone fracture accompanies to the tendon injury, physiotherapy may start a bit later.

If surgery is delayed more than several weeks, the proximal part of the tendon may shorten permanently. In this case, the cut ends of the tendon cannot be repaired directly. A two-stage surgery plan is made for these patients. In the first stage, a silicon rod is placed between the finger and wrist. This silicon rod helps in the formation of a tunnel and finally, proper finger flexion providing adhesions after second stage.  Three months after first stage, a tendon graft is taken from the same forearm (in some cases from the leg) and put in the tunnel created by silicon rod. After first stage, no splint is worn. The patient is permitted to move his/her hand immediately after surgery. But after second stage, splinting and physiotherpy needs are exactly same as it should be after regular tendon surgeries.