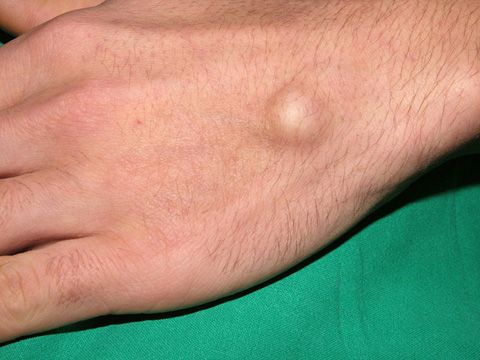 The word meaning of tumor which has entered to the medical literature and the daily use is swelling. Abnormal swellings occurred in hand are called as hand tumor even they are benign or malign. Most of hand tumors are benign. Hand tumors may be as wart or mole, and masses sourced from soft tissue or the bone under the skin.

The most frequent mass in the hand is masses are ganglion cysts (Figure 1). These cysts are sacs that include gelatinous substance. They are usually seen in the wrist as well as they may be sourced from tendon sheaths and pulleys on fingers. 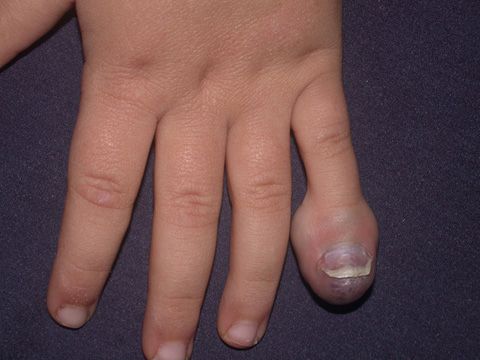 The tumour type that has the second frequency is tumour with giant cells. These masses are hard and can be lobule. It can occur anywhere, however, most frequently seen around the sheath of tendon. They are good behaved and have a slow development.

Another tumour that has frequent occurrence is epidermal inclusion cysts. They are good behaved and formed from under skin after cuts and injuries. Skin cells normally secrete a protective substance with dense firm that is called creatin. New cells are substituted with the dead ones due to environmental factors occur during skin exchange. If the skin cells stay under the skin (after cuts and skin damages), they start to produce creatin and reproduce as if skin exchange happens. Dead skin cells and creatin make a cystic form under the skin. Cyst gets larger with the increasing production of creatin and increasing number of dead cells, which is called inclusion cyst.

Masses connected with bone projecting that arise due to arthritis and trauma. Swellings due to foreign substance reaction may arise.

When the patients feel a mass in their hands, they are curious about whether it is benign or malign. Malign cancers of hand are rare. Most of them are benign. The most frequent malign tumors are skin cancers such as squamose cell carcinoma, basal cell carcinoma, melanoma. Other malign tumors are sarcomas of the bone and the soft tissue. Sarcomas diffuse rapidly. The most frequent metastasis is to lungs. Hand metastasis may be seen from other tumors of the body. Even though most of them are considered as benign, sample should be taken for pathological examination from all masses.

When masses in the hand are evaluated, examinations such as direct graphs and CT (computerized tomography) , MRI (magnetic resonance imaging) may be run. General procedure is to remove the mass totally if the tumor is not very big in size. Generally removal of the mass provides the sufficient treatment. Recurrence features of some masses in the hand are present. Therefore, regular recording of any tumor which is removed surgically and sending to pathological examination are very important for post operative follow-up.